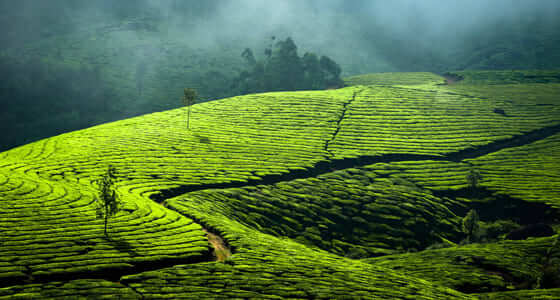 Munnar ascends as the three mountain ranges (rivers or streams) Mudrapuzha, Nallathani and Kundala consolidate. This famous destination is 1600m above the sea level. The first Tea plant sown here was by Mr. M H Sharp in 1878 in Sevan Mala Estate in Munnar from which time Munnar has now risen to become the commercial centre for some of the world's largest tea estates. It is situated at the bank of the confluence of three rivers namely Madupetti, Nallathanni and Periavaru. It was the resort of the British Raj elites.

Indigenous to this place is the famous Neelakurinji flower which blooms once in every 12 years, tourists flock down from all over to world to see this magical plant. The Nilgiri Tahr- an endangered species of the Western Ghats is another sight you cannot witness in any other part of the world. It also houses the Eravikulam National Park and Salim Ali bird sanctuary.

There are stories old and new that paint Munnar- from stories of huge Chillikomban Elephants which are considered to be one of the most dangerous elephants, the story of Pankajam Theatre where each of the 60 rooms of the hotel play movies, the hilltop of Meeshapuli Mala known as heaven on earth to the highest tea plantation in the world situated at KolukkuMala.

You could stay in Munnar for a day, a month or a year and still have things left to discover and experience.