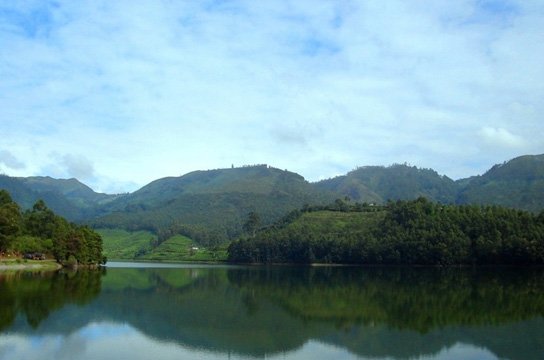 The legacy of Mattupetty

Places to Visit in Munnar

En route the Top station, we get to see KFDC flower garden which is hardly 2 Kilometres from the town and is also home to a variety of rare flowers. It is a must visit place for anyone who loves flowers or those who adore breath taking views of nature.

Moving amidst the beautiful lush tea plantations is a sight in itself. Perched atop the slopes are photo points where the picturesque beauty of Munnar tea plantations becomes even more serene and heavenly. Moving ahead there is a sight hard to be missed which is the ‘Honey Bee Tree’, a home to innumerable honeybees with honeycombs of all ages hanging along its branches.

After riding further along the Top Station road enjoying the panoramic view, we reach the Mattupetty Dam. We are allowed to walk along the stretch of the dam and relish the beauty of far-reaching hill ranges and lakes.

Construction of the dam was finished during the period of 1955 - 56. There was a temple of worship of Tamil labourers dedicated to the goddess ‘Mariamman’ in the area which got immersed while the dam got filled with water. The other sites that went underwater include a few bungalows, Labour camps and Mattupetty Market which were all constructed by the British in the 18th century. It is said that the British managers and other labourers who used to stay in those buildings shifted their base to the neighbouring villages of Kuttiyar and Kundala.

Even now, when the water level goes down during the summer season or unexpected draught due to irregular rains, the remnants of yester years emerges from within the womb of the dam. The remains of Kundala valley mono rails which got destroyed in the great flood of 1924 can also be seen there. Most of the travellers who came visiting during these periods go down to the reservoirs and enjoy the rare sight of remnants left behind from the centuries. It is fascinating to find remains of the buildings still standing without much damage to the structure upon understanding that those were constructed with stone and lime and not cement mixture as we do now.

Further ahead from Mattupetty dam is where we find the ‘Echo Point’. The most captivating feature of it is that it reverberates what is shouted from the point back to us. Another intriguing fact about Echo Point is its roadside shops where a lot of handcrafted toys, trinkets, hats, corn and spices are displayed for sale.

Travelling ahead the same route will lead us to ‘Sethu Parvathi Puram Dam’ or ‘Kundala Arch Dam’.It was constructed in the year 1946 as a part of Pallivasal hydroelectric project and is of the dimensions 259m in Length and 47m in height. This dam is located in ‘Chundavurrai Estate’ near the Top Station and the cornerstone was laid by Her Highness Rani Sethu Lakshmi Bai. Honorifically the dam was named after her. The dam covers a total area of 2.5 Square Kilometers and has 5 spillway shutters to it.

In Munnar, Kundala is another place favoured by the tourists. Boating along the Kundala dam is its major attraction. Though there are boating services available at Mattupetty and Echo Point, Kundala boating is known for its Shikara rides similar to that of Kashmir Dal Lake.

Here is your chance to stay at a heavenly spot in Munnar. Welcome to Fog Resort, where the clouds come to meet you and the cold breeze breathes in to your soul. With an amazing view, standard rooms, delicious food and exceptional service, this is the place to be with your loved ones